As our kids a

re beginning dance practice for the 55th Annual Greek FUNstival here in San Antonio, TX, I was surfing the WWW and read a fun fact about baklava on cookingchannel.com today. Apparently there is a new show called “Holy & Hungry” and the site had a slide show explaining some of the religious symbolism behind traditional recipes.  Baklava was the first item pictured, so my interest was peaked!

If you’ve ever made baklava, you know it’s a tedious and time-consuming endeavor.  Many layers of fillo are required.  I didn’t realize that there were supposed to be 33 layers.  Each layer represents a year in Jesus Christ’s life.  I’m not sure if I counted the layers before, but I guarantee you that from now on there will be 33 buttery layers of phyllo in the pan!

Can’t wait to see this movie. When my daughter was little, she’d play the “Finding Nemo”  DVD over and over every day. We still quote from it almost daily. “Fish are friends, not food!”. Find Dory will probably be more fun.

Most everybody has seen this video by now, but in case you didn’t, you should watch.  Kathy Lee Gifford talks about the personal and God fearing side of her husband, Frank Gifford.

Often when we think of famous people, we picture them having lives of wine, roses, and caviar – everything handed to them on a “silver platter.”  I find it easier to identify with the rich and famous when they talk about their humble beginnings. Kathy Lee tells of Frank’s family being grateful to eat dogfood in order to survive during the depression. Knowing that someone like Frank Gifford was able to rise up from such poverty instills hope in everyone.

It is truly powerful when celebrities  talk about the Lord and the strength they get from their faith. To me, that is what the media should do – promote faith in God and his pressence in all of our lives rather than glamorize evil and harp on the tragedies of the World.  The freedom to express our beliefs, especially in the media is often taken for granted.  It is a God-given right and priveldge afforded to citizens of very few countries these days and I think it is awesome that Kathy Lee reminded her audience of the peace and comfort God provides when you let Him into your life and throw your stone. May God rest Frank’s soul in peace and continue to bless America!

When an artists can sound as great as they do on an album in a hotel banquet room – that’s a God given talent.

This was my 3rd trip to Nashville, TN, just to attend Clay’s Fam Club Party – in true Walker Stalker mode! The CMA Music Festival was always the added bonus.

This was back when the fan club President was Lori Steuart and the parties were like family reunions!  Watch the video below – how can you not love this voice?! — with Clay Walker at Lowes Vanderbilt Hotel.gift. 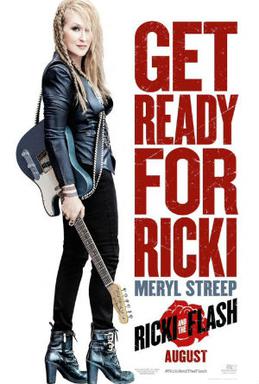 Ricki is a rock-star.  Well, at least that was the dream she pursued when she left her family and moved to California. Spoiler alert, it’s not Rick Springfield! Meryl Streep plays Ricki, the 60-year-old lead singer of a cover band – the Flash.  Mamie Gummer, Streep’s daughter, plays her troubled daughter, Julie, who with her two brothers harbor a lot of resentment towards their mother.  Ricki’s three children were raised by their stepmother, Maureen (Audra McDonald) and Dad, Pete (Kevin Kline).  They grew up more than comfortably, in a mansion, as opposed to Ricki, who’s in bankruptcy.

When Julie’s husband left her for another woman, her father turns to Ricki, because, we all know that as we go through life’s trials, sometimes we just need our Mom.  Except for very rare circumstances, no one loves you more than your Mother does.  When Ricki is feeling inadequate as a parent, Ricki’s boyfriend Greg, (Rick Springfield) the bassist in the Flash, said it best when he told her that kids don’t have to like their parents, it’s the parent’s job to love their kids – “that’s why you’re here.”

There was one technical error in the script that may bother anyone in the bankruptcy field, individuals don’t typically file Chapter 11; in Ricki’s situation, she would have been in Chapter 7. Despite that one word technicality, this movie is great! Once again Streep proves she can take any role and make it Oscar-worthy!  You may be thinking that she doesn’t seem like the rock-star type, but she pulls it off convincingly!  Mamie Gummer also does a great job and the mother-daughter chemistry between them is extraordinary. Rick Springfield and Kevin Kline are perfect for their roles as well.

Go see “Ricki & the Flash.”  You’ll laugh, you’ll cry, you’ll rock out, but most of all you’ll appreciate your family.  “Ricki & the Flash” reminds us that no matter what conflicts lie within your family, love is the glue that bonds you, always and no matter how broken your heart is, as Ricki says, “it’s like a Big Mac, it lasts forever!”  – BMT